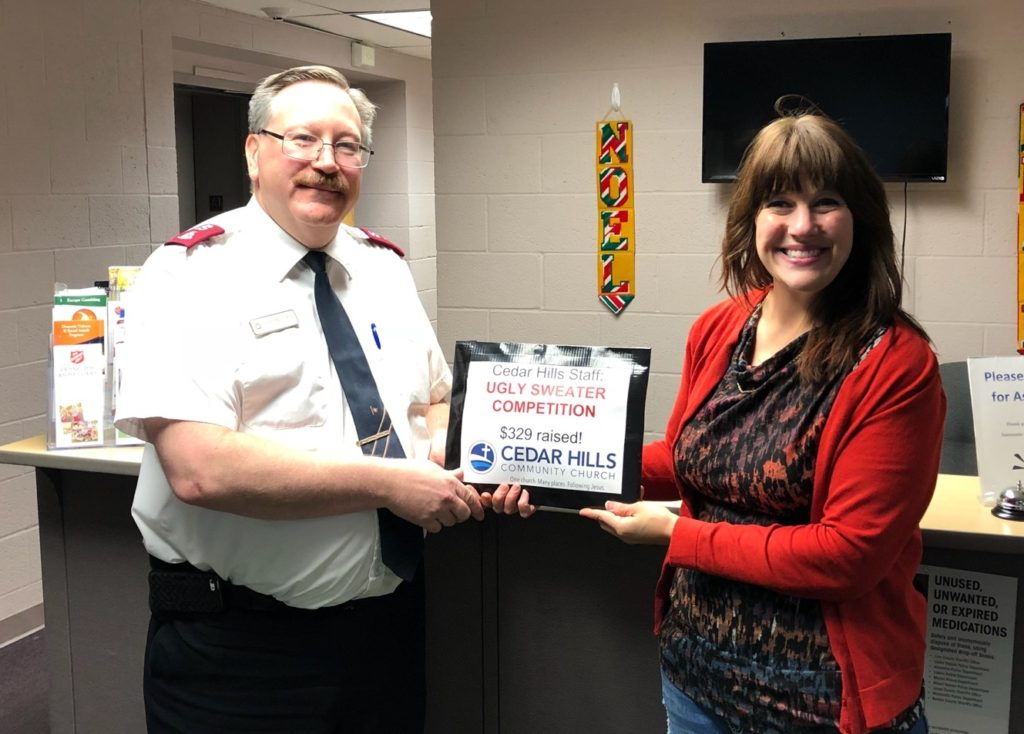 On Dec. 10, 2017 the Cedar Hills Staff took part in a friendly “Ugly Sweater” competition. Staff dressed in their best/worst ugly Christmas sweater attire, and the Cedar Hills community had a chance to vote for their favorite sweater combo.  The pics were up, the red kettles out, and Cedar Hills voted!  Our office administrator, Jennifer took the title for the ugliest sweater, but the real victory is the donation we were able to make from the contest to the Salvation Army.  Earlier today we presented our competition earnings to the Salvation Army with great joy!

Earlier this month Cedar Hills took a day of bell-ringing at the 16th Ave Fareway – and brought in the most donations for that day! Between the ugly sweaters and our kettle ringers, we were able to raise almost $1000 for the Salvation Army.

We are happy and blessed to be able to partner with our friends in the Salvation Army and appreciate the wonderful work they do in our community.

Our mission is to fulfill the Acts 1:8 calling that we will receive power when the Holy Spirit comes on us so that we will be witnesses here and around the world! This verse gives us our purpose. Our strategy is to love Cedar Rapids and the world.

We carry out our strategy by praying and asking God to grow a love for people in Cedar Rapids and around the world. We do this by inspiring awareness of God’s work locally and globally, by sending people out in response to God’s call to reach out, and by supporting missions here and around the world.

In 2017 we have seen students reached on the campuses of Coe College and Kirkwood. Katie Smith reached out to students at the University of Iowa. We reached Chinese students studying in Michigan through the work of Linda DeBoer. We started a partnership with Matthew 25 and refugee farmers to grow food to feed families. We fed hundreds of people through the Open Hands Food Pantry. We reached around the globe into Niger (Jeremy and Susan Beabout), Papua New Guinea (Gary and Denise Abbas), The Czech Republic (Beth Larson), and Turkey (John and Becky Leverington).

These are some of the ways we are the hands and feet of Jesus fulfilling the Great Commission of Matthew 28 to go and make disciples of all nations!

Our congregation supports the work of CRU, which is a campus ministry dedicated to reaching students with the good news of Jesus as Savior and Lord. Katie Smith, our CRU missionary at the University of Iowa, shared that they reached over 1,000 students through an outreach event last week called “The Maze.”

Thanks for your support, celebrate their impact, and keep praying for the students Katie is reaching at Iowa and Kirkwood this fall!

“Cru is a caring community passionate about connecting people to Jesus Christ. Our purpose is helping to fulfill the Great Commission in the power of the Holy Spirit by winning people to faith in Jesus Christ, building them in their faith and sending them to win and build others and helping the body of Christ to do evangelism and discipleship through a variety of creative ways. We are committed to the centrality of the cross, the truth of the Word, the power of the Holy Spirit and the global scope of the Great Commission. Cru offers spiritual guidance, resources and programs tailored for people from all cultures in every walk of life through many diverse outreaches.”

Earlier this year there was a horrific school bus crash in Tanzania. There was a group of medical missionaries from Iowa following that bus, who were able to rescue three children. Tragically, 32 souls perished in that accident. One of the missionaries, Dr. Steven Meyer from Sioux City had arranged to treat the three survivors at his hospital in Sioux City, but had no way to get them to Iowa.

Congressman Steve King called Franklin Graham and immediately Samaritan’s Purse dispatched a DC-8 to transport the children, their mothers, and the medical attendants. They even got a waiver from the FAA to carry
two flight crews so they only had to stop for fuel. These children had multiple injuries, but Dr. Meyer is confident they will recover fully.

He stated that many Tanzanians, including Muslims, are amazed that American Christians would step in to care for these
children.

In Alaska it isn’t always easy to drive your child to camp, many times they need to be flown. RCA missionary Brian Bruxvoort saw the need and as a pilot decided he could do something about it. He loads up his airplane with children and teenagers and flies them from the home villages to camp. Last summer, he flew 356 teenagers from 36 villages to 4 camps across Alaska. Of those 356, many of them professed faith in Christ. Through Brian’s ministry the lives of children and teenagers were changed. 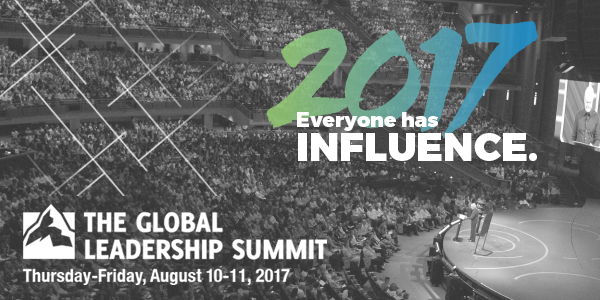 We are excited to partner with Antioch Christian Church in Marion and be able to bring the Global Leadership Summit to the Cedar Rapids area. This year’s summit is Thursday and Friday, August 10th-11th.

Our staff and consistory have been attending the Summit for the last number of years but have always had to travel out of town to attend.  This year, we’ll save lots of time (and gas money!) by traveling just across town to Antioch Christian Church in Marion.

Because we are a satellite host, we are also able to offer our members and regular attendees a discount rate to attend the summit.  Contact the office for the special code, and use this link–> to register before June 27 for only $99!

On Sunday morning, February 19th the Missions Team is packaging meals for “Take Away Hunger” in the church Gathering Space.  The meals are made of a specialized rice based mixture to feed hungry and starving people both locally and globally.  Volunteers are needed to fill 60 minute slots throughout the morning at 9am, 10am or 11am for our meal packing party!

Take Away Hunger is an Iowa-based food relief organization that unifies teams of people who package a specialized rice based soy casserole mixture which is used locally and overseas.  It is based on a simple principle of people helping people, in this instance, even kids! Take Away Hunger not only nourishes hungry children, but the spirits of the volunteers who pack the meals.  For more information on this awesome ministry, visit takeawayhunger.com

Wednesday morning at the church started with dumpster-diving to find a kid’s lost clothes. Not a normal activity. Of course it was not a normal week because we were in the middle of the Flood of 2016. Our response as a church was to partner with the American Red Cross as a shelter.

As the flood waters crested we celebrated a flood of generosity. People donated clothes, provided rides, did laundry, made food, played with kids, and loved our community. The Red Cross provided volunteers from around the country. Our volunteers came from our own neighborhoods. Richard spent the week living in our church building. He is a chef. He said, “On Friday, the water was coming. I needed a place. I made plans to come to the shelter.”

Richard moved in on Saturday. The Red Cross provided a cot and food. People donated pillows. When the buses stopped running, we provided a rides. Others spent time chatting with Richard to offer encouragement.
“I see the hand of God in this,” Richard explained, “The church responded as described in the Bible. When you did see a need, you did something about it.” He is deeply grateful that he had a place to go and people who cared. “Watching people come short-circuited me. Car, after car, after car arrived to make a donation.”

Because of the generosity, compassion, and love of our community, Richard’s experience at the shelter was very good. He was “pleased and impressed” in a situation generated by a natural disaster.

Cedar Hills continues to be the home to about 70-80 residents displaced by the Flood 2016 evacuations.  Some families have had a chance to go home while others are just now leaving hotel rooms and just joining us today.

A huge shout-out to the Johnson Ave Hy-Vee and manager KC Lyons for responding to our call for help when we needed new shopping carts for the Open Hands Food Pantry.   Each week, many of our pantry visitors need assistance getting their groceries to their cars.  When a few of our carts disappeared, we were in dire need of some replacements. KC responded quickly to our request for help and we now have three new carts for our patrons to use.

We love our neighbors at Hy-Vee! Thank you, again KC and Hy-Vee stores for your great generosity.

The Open Hands Food Pantry supports 150+ families a month with food and basic toiletry supplies.  The pantry is open Mondays 5-6pm, Wednesdays 10am-12pm and Fridays 10am-12pm and staffed by loving volunteers.  Patrons receive a bag of non-perishable groceries based on their family size and any perishables on hand (milk, cheese, meat, etc.) We are grateful for the support of our church and local businesses who help us make a difference in our community.

Loading the carts came with another story… A woman who saw us loading the carts was convinced we were stealing them.  Being a good Samaritan, she flagged us down, standing in front of our truck so we couldn’t move while she began to call the police.  Luckily, we convinced her that the carts had just been donated! We had a great time laughing with her and thanking her for looking out for her community.