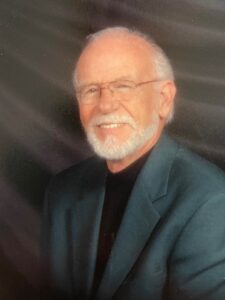 The visitation and funeral for Mal Gould will be Friday, Sept. 17.  The visitation will be at 3:30pm, with the funeral starting at 4:30pm.  The service will also be broadcast on Facebook on our live stream page: http://www.facebook.com/cedarhillscommunitychurch/live starting just a few minutes prior to the service.

The family is asking for face masks to be required of all in attendance.

Upon his return from the Air Force, Mal married his former wife Joan Spitzer, and together they had their son Jon and daughter Kelly. Mal then worked at Moore Business Forms until 1975, when he started his own print shop called Kalona Graphic.

In 1979 Mal met the love of his life and future wife, Lila. They were joined in marriage on January 5, 1980. Together Mal and Lila loved traveling and spent many years moving around the U.S., making homes in Florida, New Mexico, Michigan, and many other states.

In their later years, Mal and Lila settled in Iowa where Mal spent 12 years working at Hy-Vee Drugstore. Mal loved chatting with his coworkers and customers, and they all became a second family to him.

Besides his time at Hy-Vee, Mal loved woodworking and carving, taking care of his backyard birds, and reading books. He was a loyal Chicago Cubs fan and a proud member of Cedar Hills Community Church.

Mal is survived by his loving wife of 41 years, Lila; his son, Jon (Brenda) Gould and his daughter, Kelly (Michelle) Gould; stepsons Gary (Rita) Yoder, Randy Yoder, and Larry Yoder; his brother Jim Gould; as well as 13 grandchildren, 13 great-grandchildren, and many cousins.

Mal’s final resting place will be in the Serenity Gardens at Cedar Memorial. The family would like to thank the wonderful nurses and doctors at Mercy Hospital as well as the staff at Heritage.