Telling a preschooler the real Easter story is a delicate matter. No bunnies or colorful eggs, just felt pieces to show the story. We tell the whole story, scary parts and all. We begin by saying, this is the most important story ever and it’s a real story.

We discuss, all the time, if a story we read is real or make believe. Most of them can tell you the real story about a little baby born in Bethlehem, but now that boy is a grown man, already a hard concept to imagine for a young mind. Then, we talk about how some people hated Jesus. What?! They thought he was a good guy. Yes, he is a very good guy, but mean people wanted to hurt him. They ask, “Why?” Well, Jesus told everyone that he was the Son of God and he performed miracles, but some people were threatened by his power and wanted to kill him. “What? Like really kill him?” they ask. Yes, they beat him badly and nailed his hands and feet to a cross. He hung there until he died.

Their eyes are as big as saucers and the room is very quiet.

Then, Jesus’ friends wrapped his body and put him in a tomb with a huge rock in front so no one would
bother him. His friends were very sad; they went to the tomb three days later, but the stone had been
rolled away! This is the good part! An angel appeared and told them that Jesus was risen and he was not in the tomb.

What?! Now their heads are spinning trying to think how that happened.

We tell them that God raised Jesus from the dead; he was seen by many people; and then he went to heaven and now sits with God. We finish the story telling them that Jesus was sent by God to die for all our sins, every one of us.

“Wait, what?! We are part of this story?!” Yes, we are all sinners and Jesus died for us. Young minds blown!

John 3:16-“For this is the way God loved the world: He gave His one and only son, so that  everyone who believes in him will not perish, but have eternal life.” 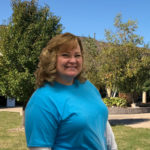