The Gospel According to Legos Everyone knows about the ubiquitous plastic building blocks called “Legos.” Invented by a carpenter in Denmark, “Legos” comes from a Danish phrase that means “play well.” Since the 1950’s, 600 billion Lego parts have been manufactured.

So what do Legos have to do with the gospel of salvation?

The interlocking toy bricks are created for one purpose only—to interlock! They are meant to be snapped together into a magnificent construction. A pile of loose blocks is useless and impresses no one. Unattached bricks scream, “Build me into something great!”

God created human beings for a similar purpose. According to the creation story in Genesis, we are meant to be connected in supportive families and communities. God is fitting us together to create something amazing. And though selfishness and egoism now infect the world to break us apart, God is the master builder who patiently works to repair his broken creation.

The gospel can’t be reduced to “pie in the sky bye and bye.” And though it begins with the forgiveness of sins, the plan of salvation goes further. God so loved his lost and scattered “Legos” (you and me), that He gave His only Son to re-assemble us into a glorious construction known as the family of God, or the body of Christ, or the temple of the Spirit.

This is good news. On the cross, Jesus atoned for the self-centered pride that blocks compassion and destroys unity. He calls us to repent and welcome the gift of his new creation, to be the peace-making, interlocking community that reflects the image of God.

As you read this, I hope that you have a warm cup of coffee and a comfortable chair because some time of relaxed reflection may result. So find your “inner place of thought” and let’s go… I am curious how you respond to your children when you see them fail. Perhaps you are surprised or maybe you think that it reminds you of yourself. Often I hear parents say that they see themselves in their children, and we don’t find this surprising since our DNA speaks heavily of close knit replication. On that first glorious day of birth we say, “Hey, she has my eyes” or “… looks like Grampa’s chin…” These are normal and correct observations that we all make.

What about when we see our child acting in a certain way that we really don’t want to promote, but we dismiss it because we could see ourselves doing the same thing? In the world of psychology we call this “projecting.” Basically, this is placing our own feelings on someone else who is truly uniquely different.

At some point along the road, we will have to step up and reteach the child’s path or watch them struggle with the consequences of our lack of intervention.

So I implore you to prayerfully consider this thought and ask the Holy Spirit to give you wisdom in this point. 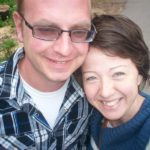 If you are like me, you not only support the missions of Cedar Hills, but you have your own missions that you support. Some of my favorites involve reusing items we may normally throw away. For years I have been sending used greeting cards to a center in Waverly, National Geographic and Reader’s Digest to a mission in Ohio, and cancelled stamps to Alliance Stamp Ministry who sells them and uses the funds to send medical aid/items to Haiti. Recently, I heard about another use for an item we usually throw away – socks! Yes, those socks that may have gotten too stretched out, have a hole in them, or are missing one to the pair. They can be recycled!

The US is on track to generate 35 billion pounds of textile waste by 2019. Textiles are one of the fastest growing waste products in the world and also one of the most recyclable waste products (most can be remade into another item). Recycling a pair of socks can save up to 17 gallons of water and 66 BTU’s of energy!

The socks are graded and items in the best condition are sterilized, washed and sent to individuals in need. The items in poor condition are broken down for fibers, sold as insulation and other useful products, and all revenue is donated to non-profits. This is exciting! Send your socks to Nice Laundry Recycling, c/o Faithbox, 550 Industrial Road, Unit C, Carlstadt, NJ 07072, or bring them to me, plus any of the other items listed above, and I will send them with mine. “Let us not grow weary in doing good” (Galatians 6:9).

February was full of fun activities! Everyone learned about the mail and what happens to your letter after you put it in the mailbox. We all enjoyed giving and receiving valentines!

Our testing is done for our 4– and 5-year-olds and report cards have been sent out. The 3-year-old classes had fun learning about snowmen and winter birds. We also learned about mixing colors and transportation! Second report cards for our younger classes will be sent out before Spring Break. (Spring Break will be March 13-17, the same as CR Schools.)

We were blessed by visitors from Linn County Conservation. Programs included ‘Winter Birds’ and ‘Winter Wildlife.’

Please mark your calendars for March 21 to donate blood! Mississippi Valley Blood Center will come here and set up in the Gathering Space. Your time from check-in to check-out is less than an hour. Please call me to donate; our area is in desperate need.

I can’t believe there are only three more months of school left! I’m ready for Spring and we can’t wait to see all those flowers come up in front of our windows again!

I want to remind everyone that we will be offering a 6-week summer school program (of two 3- week sessions) in June and July. This program is for current Noah’s Ark students only. More details coming next month.

One of our visions for ministry is to engage in collaborative partnerships with others in the community who are doing good. For many months the consistory has been discussing entering into an intentional partnership with the ministry of Matthew 25 to use some of our property for refugee gardens, urban gardens, and student gardens. At our February meeting we authorized the deacons to pursue this partnership and draft memorandum of understanding for how this collaboration will work. We anticipate that some gardening will begin this spring. The board is excited to see how this kind of partnership develops and hope that this will be a learning process for future collaboration that will bless our community.

The project will teach children and families how to grow, eat, and preserve high quality food right in their own neighborhood. More details coming soon. If you have questions, don’t hesitate to ask Willis Sneller or Alan & Beth Brockette. For more information about Matthew 25, go to www.hub25.org.